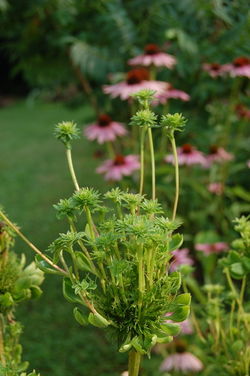 The pytoplasmas are a group of bacteria-like, plant pathogenic prokaryotes, placed under the group of Mollicutes, which were known as mycoplasmalike organisms (MLOs) before 1995. They colonize the phloem system of their host plants, restricting its normal function. The symptoms caused by pytoplasmas include stunting, yellowing, witches’ broom (numerous shoots with small leaves), phyllody (flowers are replaced by leaf-like structures), virescence (greening of flower parts) or proliferation (growth of shoots from floral organs). These diseases can cause economically important damage in fruit trees and ornamentals. They are transmitted by leaf-sucking, hemipterous insects, mainly from the families of Cicadellidae, Psyllidae and Cixiidae.

Pytoplasmas are non-helical prokaryotes without cell wall. They have not yet been cultivated in vitro and currently all known species are classified under the genus "Candidatus Phytoplasma". The taxonomical classification of pytoplasmas is based on the size and genetic structure of their 16S ribosomal RNA molecules. More than 30 16Sr-groups of pytoplasmas have been described.

The following 16Sr groups are currently entered under the Phytoplasmas: