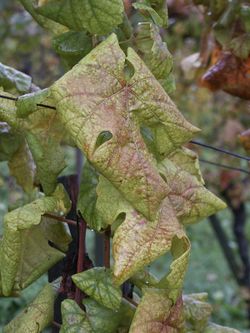 This group of phytoplasmas contains several important disease causing agents like the flavescence dorée phytoplasma which affects grapevine in the Mediterranean region. It has be subdivided into 5 subgroups, named 16SrV-A to 16SrV-E. Several phytoplasmas have been named as ‘Candidatus Phytoplasma’ species.

The following species are currently entered under the 16SrV phytoplasma group: