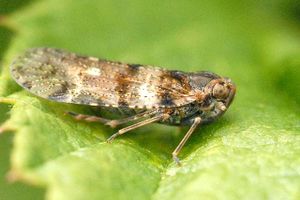 This family of plant-sucking insects contains more than 2,000 species. The nymphs often feed on roots or at the base of plants. The feeding damage caused is usually not significant but several species are important vectors of virus and phytoplasma diseases, e.g. those of the genera Hyalesthes and Reptalus.

The Cixiidae appear to be most closely related to the Delphacidae (Song & Liang , 2013) and they have a similar body shape and size, typically less than 10 mm. However, they lack the prominent, mobile spur on the hind tibiae of that family. The adults are characterized by six spines at the tip of the hind tibiae and by a series of tubercles along the veins of the forewings.

The following genera and individual species are currently entered under Delphacidae: