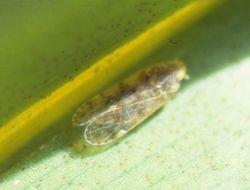 This genus of planthoppers contains between 50 and 100 species which have been described from South-East Asia and the Pacific, Africa and North America. The taxonomy of several Myndus species has been subsequently revised, placing them in related genera, e.g. the important phytoplasma vector M. crudus which is now known as Haplaxius crudus. This species and several Myndus species have been found feeding on palm trees and Myndus taffini has been shown to be a vector of the Coconut foliar decay virus.

Like many other species of Cixiidae, Myndus species lay their eggs on plant roots, often grasses, where the nymphs feed and develop. The breeding host can be a different plant species from that preferred by the adult planthoppers. The adults are small, about 3-6 mm long. The genus is characterized by the morphology of the vertex, frons, antennae, mesonotum (with 3 keels) and the spines on the hind tibiae.