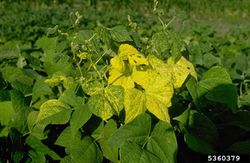 The genus includes viruses similar to the Bean golden mosaic virus. The viruses cause diseases of dicotyledons in tropical or semi-tropical regions. They are transmitted by Bemisia whiteflies. More than 200 species have been described.

The viruses have circular single-stranded DNA genomes which are either monopartite or consist of DNA-A or DNA-B. In monopartite members, an additional single stranded DNA molecule, a betasatellite, is usually associated with the viruses. Such betasatellites have no sequence homology with the begomovirus genome and are about half its size. They encode a single protein which enhances virus symptoms.