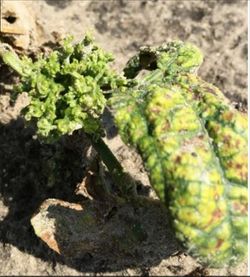 This virus is a bipartite begomovirus, first described from watermelon in California. It is widely distributed in North America and infects various cucurbits, but also bean plants if they are grown close to infected cucurbits. The symptoms include stunting and distortion of the leaves like crumpling or curling, as well as yellowing, mottling and mosaic leaf symptoms. The fruits can be also deformed.

Some cucurbits are not affected by the virus and do not show symptoms or recover after some time. CuLCrV is transmitted by the whitefly Bemisia tabaci in a persistent and circulative manner. The genome consists of 2 single-stranded DNA molecules (DNA-A and DNA-B) each with a size of around 2600 bp.