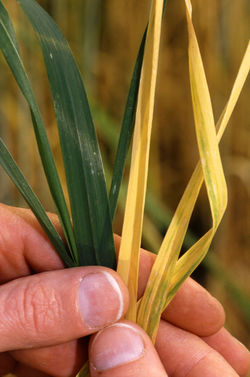 The symptoms caused by BYDVs include stunting and chlorosis which starts at the edges and tips, then spreading over the whole leaf. The leaves become bright yellow (barley) or orange (oat). Seed production is reduced, resulting in major yield losses, especially in oats. E.g. in North America, wheat losses by these viruses in combination with the aphid vectors have been estimated at up to 30-40%.

The aphids transmit the viruses in autumn to winter cereals, and again in spring from winter cereals to summer cereals as well as to maize. The diseases have an incubation period of 2-4 weeks, they can be managed by using resistant cultivars. Virus particles are hexagonal, 25-28 nm in diameter, with a single-stranded RNA. They are found in the phloem cells of the host plant.

The following species are currently included in the group of Barley yellow dwarf viruses: