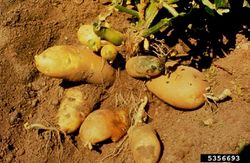 These are small, single stranded, circular RNA molecules which can replicate and cause diseases in plants. Several species are of economic significance and can cause important diseases of crops like tomato, potato, pepper, citrus or chrysanthemum. They may be also quarantine pests. The Coconut cadang-cadang viroid has caused devastating outbreaks in some parts of the Philippines, especially during the 1950s and 1960s, killing millions of coconut palms. Viroids are commonly transmitted through pollen, seeds or mechanically during pruning and harvesting operations (e.g. Barbosa et al., 2005). However, insect vectors may also be involved in viroid transmission (e.g. Van Bogaert et a., 2016).

Viroids were discovered in 1971 at the Agricultural Research Service in Maryland, U.S.A. by Ted Diener. While researching the potato spindle tuber disease, believed to be caused by a virus at that time, he found that the infectious agent could not be concentrated by high-speed centrifugation. He, therefore, concluded that the agent must be smaller than a virus and he named it a "viroid". About 30 species of viroids have been described and assigned to 2 families, the Avsunviroidae and the Pospiviroidae.

The known viroids only contain between 246 and 467 nucleotides. While the RNA is single stranded and circular, there are matching base pairs which form hydrogen bonds, producing a collapsed circle (similar to a rubber band pressed together). The RNA molecule does not encode a protein which might initiate its own replication. Instead, it redirects a host cell DNA-dependent RNA polymerase and replicates through an RNA-to-RNA rolling-circle mechanism. This involves three steps:

In viroids multiplying in the nucleus (Pospiviroidae), the RNA polymerase II is used in the first step. This enzyme is normally involved in the transcription of the DNA into messenger RNAs. However it also accepts certain viroids as a template and then produces a linear RNA molecule, consisting of several copies of the viroid RNA sequence. In viroids multiplying in the chloroplasts (Avsunviroidae) other RNA polymerases are involved in this step.

In the different viroid groups different mechanisms are involved in cleaving the oligomeric RNA into single, linear copies of the viroid. E.g. in the family Avsunviroidae the viroid RNA has certain structures (hammerhead ribozymes) which cleave by themselves. Host RNase is involved in the cleavage of other viroids. Host RNA ligase is finally involved in transforming the linear monomers into circular forms. Alternatively, host DNA ligase may be involved like in the Potato spindle tuber viroid (e.g. see Nohales et al., 2012).

The following viroid genera are currently entered in the system: