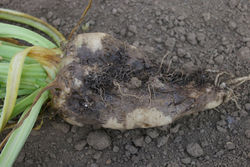 The fungi of this small genus are saprophytic, but also facultative plant pathogens which cause important diseases of crops. As resting or overwintering stages, the species do not produce conidia but sclerotia. These are asexual multicellular propagules, composed of densely packed hyphae which can survive for longer periods. Sexual basidiospores may be also produced.

Although the genus had previously been used for many species, it is currently mainly restricted to Rhizoctonia solani and its close relatives. R. solani is the most important member of the genus and has been named the type species by a special ruling under the International Code of Botanical Nomenclature.