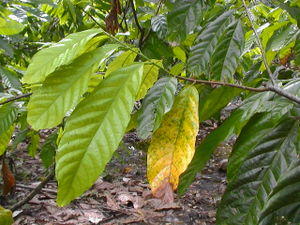 cacao tree with symptoms of vascular-streak dieback - defoliation and “green island” symptoms (click on image to enlarge it)
Author: David I. Guest, University of Sydney

This fungus is found in south-eastern Asia. In the 1960s, it caused widespread epidemics on cacao in Papua New Guinea, and later also in other regions. It can also infect avocado trees. On cacao, initially, a single leaf turns yellow with few green areas remaining (green islands). As the disease progresses, other leaves become chlorotic and then necrotic. The vascular tissue becomes necrotic and the affected branch will die off. The pathogen will spread to other branches and will kill the tree if it reaches the main stem.

Since the pathogen has a limited ability to spread, it can be controlled through quarantine measures. Progress has been also made in breeding resistant cultivars.