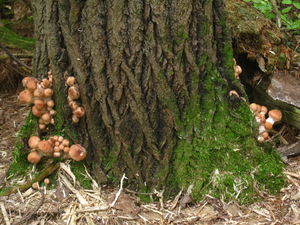 The Agaricomycetes are the largest class of basidiomycete fungi with more than 20,000 species. It includes the edible mushrooms with their large, above-ground fruiting bodies, plant pathogenic species as well as many other forms. The mycelium consists of filamentous, septate hyphae, usually without a yeast-like phase. The cells have 2 haploid nuclei, typical for the Basidiomycota. The mycelium network of Armillaria gallica has been estimated to extend over more than 10 hectares and to reach an age of more than 1000 years.

Note:
This page only deals with plant pathogens. For other groups of Agaricomycetes in the system see

The following orders are here included: