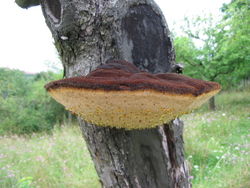 fruiting body of Inonotus hispidus on trunk of apple tree (click on image to enlarge it)
Source: Wikimedia Commons

This order contains more than 500 species of mostly wood-decaying fungi. While the majority of species live on dead wood, some are recognized as plant pathogens and cause white and brown rot diseases on the trunk or the roots. Some species have been also used in traditional medicines.

The morphological characters of the order are variable and the group is mainly characterized by its DNA structure. The family Hymenochaetaceae is morphologically more uniform and all form conspicuous fruiting bodies (basidiomata). This family includes the plant pathogenic genera Phellinus, Inonotus and Hymenochaete.