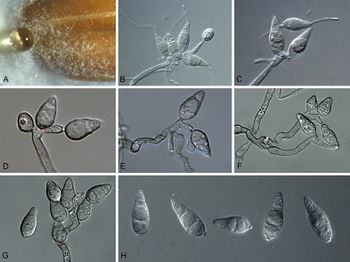 The fungus is believed to have a South-East Asian origin, but is now distributed in warmer and tropical regions around the world. On rice, mainly the leaves are infected and show typical diamond-shaped lesions. Panicles and leaf collars may also show symptoms. Spore production might start as soon as a week after the infection.

Conidia are usually three-celled and spindle or club-shaped with a length of around 25-30 µm. They are dispersed by rain splashes or wind. Sexual spores (ascospores) are only known from laboratory cutures. The fungus can persist and overwinter in the environment in infected plant residues.

Resistant varieties have been developed, but resistance breakdown is common. Crop rotation and avoiding the overuse of nitrogen fertilizers are recommended as additional management options. The use of fungicides is usually not economical and is considered as a control option of last resort.

Wheat blast is a serious wheat disease in parts of South America and has been also reported from Bangladesh. It can cause yield losses of up to 70%. Both, P. oryzae and Pyricularia graminis-tritici have been reported to be involved in the disease outbreaks (Castroagudín et al., 2016). Some authors regard P. graminis-tritici as the main cause of wheat blast in South America and Asia (Ceresini et al., 2019).

Taxonomic notes:
The scientific name for the rice blast fungus has changed repeatedly over the years causing considerable confusion among plant pathologists.