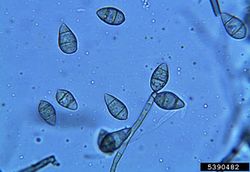 The genus contains the important rice blast fungus (Pyricularia oryzae). The pale brown conidia are often pyriform with a round base, a narrow tip and 2 septa. They are formed singly on the conidiophores. The ascomata are roundish, brown to black with long necks. The asci contain 8 spores.

The type species is Pyricularia grisea. The sexual forms have bee described under the genus Magnaporthe.