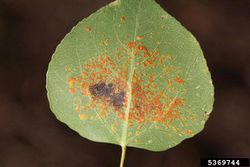 This genus includes around 50 species of rust fungi. About 20 of them have trees from the family of Salicaceae (poplars and willows) as telial hosts and conifers as aecial hosts. Others have only one host plant (e.g. Melampsora lini). Several species are regarded as important pathogens of poplars, pine trees or agricultural crops. Apart from M. lini damaging flax, these include for example, M. larici-populina and M. medusae on polar, or M. epitea on willows.

A typical life cycle of the species causing poplar rust (see Vialle et al., 2011) starts with the teliospores germinating in spring and releasing airborne basidiospores. These disperse and infect conifers where first spermogonia and later aecia develop. The wind-dispersed aeciospores infect poplar trees where uredinia are formed on the lower leaf surface. The urediniospores disperse again and cause several disease cycles on poplar during the summer. Finally, telia develop in autumn and the teliospores overwinter on the fallen poplar leaves.

The members of Melampsora are characterized by forming a crust of single-celled teliospores on the leaf surface of the host. Current identification methods depend mainly on the DNA structure of the species. For a review of the species infecting polar, see Vialle et al. (2011).

Currently, the following species of Melampsora have been entered into the system: