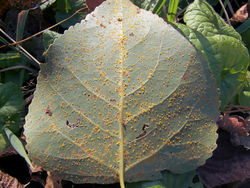 The fungus is common in temperate regions and causes leaf rust on poplar. It is native to Eurasia and has been introduced in other regions like North America (first record in 1991 from Washington State) and New Zealand.

Infections shorten the life of the leaves, reduce the growth of the trees and predispose them to other diseases. Growth reductions of up to 50% have been reported in young poplar plantations affected by the disease. Infected leaves develop uredinia, about 1 mm large, on the underside of the leaves. The urediniospores disperse through the air and can cause epidemics under suitable environmental conditions.

In autumn, black telia are formed on the leaves containing teliospores. These overwinter on the fallen leaves. They germinate in the spring and form haploid basidiospores which disperse through the air and infect an alternate host. Larix species are the main alternate hosts on which the fungus completes its development cycle. Pinus radiata has been also reported as alternate host in some regions. On the alternate host, haploid pycnia with pycniospores and receptive hyphae are formed for the sexual reproduction of the fungus. Receptive hyphae which receive a sexual compatible pycniospore form aecia and aeciospores. The aeciospores can again infect poplars.

M. larici-populina is a macrocyclic rust fungus which forms all spore types on its two host plants. The urediniospores are elongated, sometimes thicker on one end, 30-50 x 15 µm large, and covered with small spikes. The telia are about 200-300 µm large and the teliospores measure 35-45 x 5-10 µm.