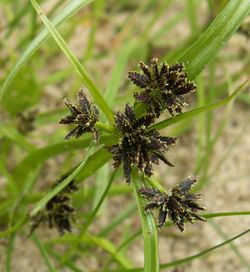 This is a large genus of sedges with around 700 species, including various weeds. The plants grow in water or in wet areas. Among the species of this genus is Cyperus papyrus, used in ancient times to make papyrus. The genus also contains various weeds like Cyperus rotundus.

The genus is characterized by the plants having a long, bare stem between the basal leaves and the leaves surrounding the inflorescence. Other characters include the morphology of the flowers (bisexual) and of the seeds. However, there is evidence that Cyperus is paraphyletic and attempts are under way to redefine the genus and reclassify the species.