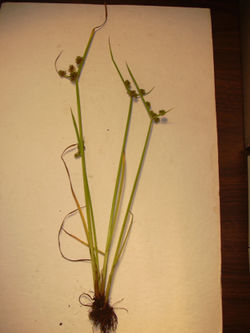 The sedge is a weed of rice in tropical and subtropical regions which can form dense mats and can cause losses of up to 50%. It is mainly a problem in contaminated aerial sown rice. The plant grows to a height of up to 100 cm. The inflorescence is umbrella-shaped and the flowers are greenish brown to purplish and cluster densely to form round flower heads. The plant produce a large number of brown seeds, about ½ mm long, through which it propagates. It grows in flooded or very wet soil, but does not tolerate deep flooding.