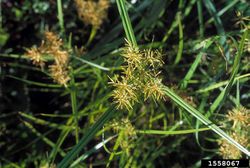 The sedge is an abundant weed in warmer regions, but certain varieties may be also cultivated as a crop for its tubers (tigernut or earth-almond). Affected crops include cereals (e.g. maize or rice), vegetables, oil crops (e.g. ground nut or soybean) and cotton. It effectively competes for light, water and nutrients and thrives especially in poorly drained soil. It is tolerant to heat, drought, and flooding. Yield losses of more than 50% have been reported (e.g. Meyers and Shankle, 2015).

It produces many small seeds which disperse through water or wind. Control is often difficult due to the persistent tubers. The tuber can even germinate after having been kept dry for years. They can also disperse through animals or agricultural equipment. For control, tillage, solarization, cover crops and herbicides are used.

The stems are 3-sided and the leaves are arranged in a triangular fashion. The leaves grow to a length of 10-25 cm. The inflorescences are yellowish (as compared to purple nutsedge), with small flowers producing single seeds like grasses. The tubers are often round and up to 2 cm wide. The root system includes also long rhizomes which form new shoots.