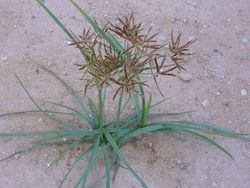 The species is a common and serious perennial weed in subtropical and tropical regions around the world. Affected crops include cereals (e.g. maize and rice), vegetable (e.g. tomato or pepper), soybean, sugarcane and cotton. Yield losses of more than 50% have been reported for some crops. In India, studies on soybean showed a yield reduction of about 10% at a density of 20 C. rotundus plants per m2 (Das et al., 2014).

The plant does not have a tall foliage, but can effectively compete with crops through its fast growth rate, quick reproduction by rhizomes and tubers as well as by its allelopathic effect on other plants. Per hectare of cropping area 10-30 million tubers can be formed in one season. The biology and weed status of C. rotundus is similar to that of yellow nutsedge.

Control depends mainly on destroying the persistent tubers which typically grow at a depth of 15-20 cm. The seeds are mostly not viable. Summer tillage is recommended for control, as tuber can be killed by leaving them drying on the soil surface for several days. Other control methods include crop rotation, herbicides, mulches and thick plastic covers.

The species is characterized by its purple to red-brown flower heads. It has dark-green foliage and its tubers are arranged in chains along the rhizomes. The tubers are about 1-2 cm long and are not edible. The plants can grow to a height of more than 1 m.