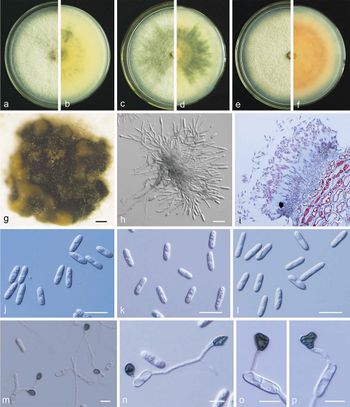 The fungus has been described as a common pathogen with a world-wide distribution and a very large host range, causing anthracnose, rots as well as leaf diseases on fruits, vegetables and many other crops. A molecular investigation by Weir et. al. (2012) has provided evidence that the fungus is part of a species complex of closely related fungi. According to these authors, Colletotrichum gloeosporioides s.str. is wide-spread, infects mainly citrus and appears to be a different species from Glomerella cingulata (the previous teleomorph synonym).

Apart from citrus, other fruit trees like mango or pear, as well as grapevine can be infected by C. gloeosporioides s.str. The fungus has short, one-celled conidia which are smooth-walled and hyaline. The shape ranges from cylindrical with rounded ends to ovoid. They have a length of around 15-20 µm and disperse through wind or rain. Ascospores are important for long-term survival.

The species complex also includes the following species which have been previously regarded as part of C. gloeosporioides: