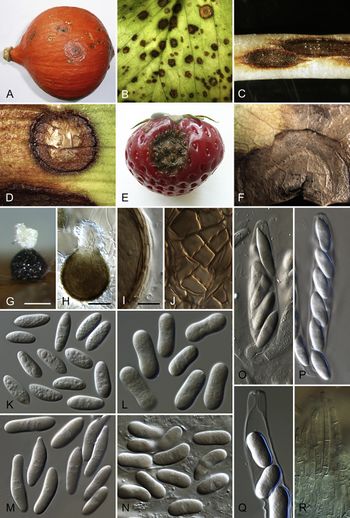 Colletotrichum is a large genus of fungi and includes many important plant pathogens which primarily cause anthracnose diseases with clearly defined, often sunken sesions. Alternatively, infected plants can develop stem end rot, diebacks or seedlings blights. Fruits are commonly infected by pre- and post-harvest diseases. Some species have a wide host range while others predominantly infect a smaller group of plants (e.g. grasses or legumes) or even plants from a specific genus.

The conidia are hyaline, oval to elyptical in shape. These are formed in small fruiting bodies (acervuli) at the surface of the infected plants. The acervuli are often dark and contain black spines (setae). The sexual forms have been described under the genus Glomerella Spauld. & H. Schrenk, 1903. Molecular taxonomic studies have shown that several of the most common plant pathogens of this genus, like C. acutatum or C gloeosporioides are complexes of morphologically indistinguishable species.

Economically, the most important species of plant pathogens are:

The following species are currently entered under the genus Colletotrichum: