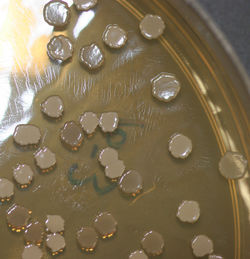 The genus Bacillus contains rod-shaped, Gram-positive, usually aerobic bacteria which often form durable endospores that can survive in the environment for many years. Their biology ranges from useful entomopathogens to disease causing organisms.

A number of species have been used as antagonists to protect plants from diseases caused by fungi, nematodes or other bacteria. The antagonistic biology of Bacillus has be attributed to their production of various cyclic lipopeptides such as bacillomycin, iturin and fengycin. The latter 2 compounds have antifungal activity.

Note:
This page refers to antagonists only, for other groups see:

The following antagonistic species of Bacillus are currently entered in the system: