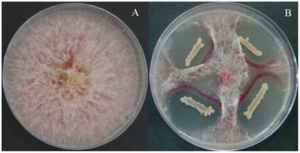 The bacterium is a Gram-positive, rod-shaped bacterium which is widespread in the environment and known as an efficient antagonist against other organisms like fungi or bacteria. It is marketed in various products. In agriculture it is usually applied as seed treatment and generally promotes plant health and improves resistance to various plant diseases, mainly those caused by plant pathogenic fungi and bacteria. Even medical preparations are available against gastrointestinal and skin infections. Few negative effects are known.

For details on this species see the respective page in Wikipedia.

Note: This page deals only with strains antagonistic to plant diseases, for other strains see