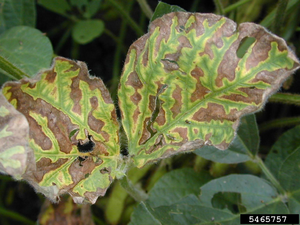 This page deals with strains and isolates of Neocosmospora phaseoli infecting soybean plants and causing the "soybean sudden death syndrome". The symptoms of this disease start with root rot and vascular discoloration of roots and stems. Externally, chlorotic spots and mottling appear on the leaves, followed by interveinal chlorosis and necrosis on the leaf margins. Finally, plants are defoliated, leaving petioles attached to the stems. Pods are also aborted and the plants die prematurely.

The strains/isolates causing the disease cannot be distinguished taxonomically from Neocosmospora phaseoli (Sandoval-Denis et al., 2019). However, the disease has been predominantly reported from North and South America, where it has been particularly destructive in soybean fields, resulting in up to 50% yield losses. Fusarium virguliforme and several other species have been regarded as causal agents of the disease (e.g. see Aoki et al., 2005). All these species are currently classified as synonyms of Neocosmospora phaseoli, but some have been reported to show distinctive morphological features. For example, F. virguliforme has been described as having comma-shaped and elongated oval microconidia (Chehri et al., 2014).

Sudden death syndrome of soybean was first noticed in the U.S.A. in 1971, but has become common in other soybean-growing countries of North- and South America. The disease agent is soilborne and forms blue-to-purple sporodochia on the root surfaces. These produce macroconidia and chlamydospores. The macroconidia are curved, about 45-55 x 5-6 µm large, with 3-5 septa. Chlamydospores are spherical. Cultures also produce short 2-celled, comma-shaped conidia.

The disease overwinters in plant debris and as chlamydospores in the soil. Infections are promoted by cool and wet conditions. Crop rotation and avoiding soil movement is recommended for management.