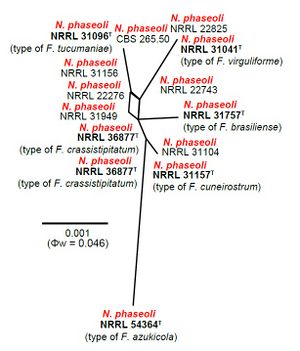 This fungus is widely distributed and causes root diseases on a number of legume species like Phaseolus beans or soybeans. It is a soilborne pathogen, infecting first the roots. The external symptoms can include chlorotic spots, leaf mottling, interveinal chlorosis, necrosis of the leaf margins, defoliation, abortion of pods, as well as plant death. However, the symptoms are variable on different legume crops and cultivars. Yield losses can be severe, with soybean sudden death syndrome being the most important disease economically. See the page on that disease for more details.

N. phaseoli is part of the Fusarium solani species complex. Several taxonomic reviews have concluded that a number of species described under Fusarium and Neocosmospora should be regarded as synonyms of N. phaseoli (see the list below). These include common crop pathogens like Fusarium virguliformis or Fusarium tucumaniae. Some of these species appear to differ in their biogeographic distribution, pathogenicity to certain plant hosts, as well as their morphology. However, these variations are not mirrored in genus-wide phylogenetic studies using markers traditionally employed for this genus (see Sandoval-Denis et al., 2019 and illustration at right).