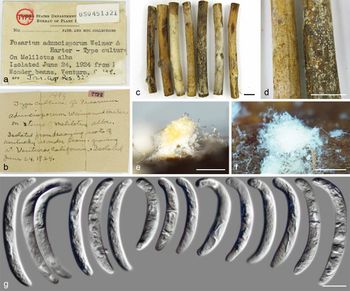 This fungus is widely distributed and causes potato dry rot. A brown to black rot develops locally on the tubers after mechanical injuries. The rot may appear in storage after about 1 month. A sunken lesion develops on the surface and the tissue around an injury, dries out, and shrivels. The tubers can become mummified. Fusarium caeruleum and Fusarium sambucinum also cause potato dry rot. N. solani has been also identified from humans (e.g. from nails), soil samples, various organic materials like wood or dead fruits, as well as from plants other than potatoes.

The name Fusarium solani, which has been used for this species, is now regarded as a group of closely related species (Sandoval-Denis et al., 2019). This Fusarium solani species complex causes various other diseases on a variety of crops, mainly root rots or damping off diseases. More than 20 formae specialis, varieties and subspecies, previously assigned to Fusarium solani, belong to this complex and have been assigned to different species (see the partial list below). Many older reports of Fusarium solani causing crop diseases can no longer be assigned to the correct species, but are still listed here under Neocosmospora solani in the above literature lists.