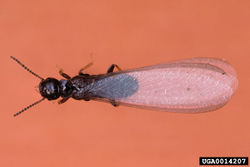 This is an important and widespread genus of termites, causing billions of US$ in damage to wooden structues annually. On the other hand, they are also important for the ecology of forests. The species mainly occur in warm and humid Palearctic regions but can be also found in some temperate areas. They are cryptic and usually only the winged forms (alates) are encountered. They build their nests underground. Wooden structure are infested if these have contact with the ground or when the termites enter a building through cracks and construct shelter tubes along the concrete walls up to the wood.