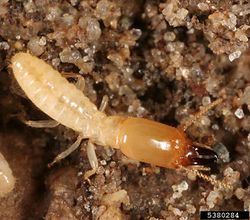 This termite is native to eastern and central parts of North America. It has been accidentally introduced into other countries in the Americas (Canada, Bahamas, Chile, Uruguay), as well as in Europe (Austria, France, Germany, Italy) and the Canary Islands. In many of these introduced areas it exists as small pockets. The introduction into and spread within France has been well studied. There, it had been described as a separate species (Reticulitermes santonensis) and is believed to have arrived from Louisiana in the 18th century, a French colony at that time (Perdereau et al., 2019).

R. flavipes is one of the most important pests of wooden structures in North America and hundreds of million of US$ are spent on its control every year. It builds its nest in moist soil and infests wooden structures in contact with the soil. However, it can also penetrate through crack in concrete slabs and build shelter tubes over concrete structures. Mainly moist wood is at risk.

Colonies have on average around 300,000 workers but can reach a size of several million workers. Mature colonies (more than 5 years old) produce swarms of alates in spring, consisting of males and females which mate, shed their wings, become kings and queens and form new colonies. The eggs can develop into workers and some of the workers (about 1-2%) develop into soldiers. Alternatively, eggs can become "pseudergates" and "nymphs" which are early stages of winged forms or of supplementary reproductive stages which can replaces the king or queen of the colony.

Alates are black, about 1 cm long and larger than other Reticulitermes species in North America like R. hageni or R. virginicus (about 0.7-0.8 cm). Tibiae and tarsi are yellowish. Productive queens can reach a size of up to 9 cm. Workers and soldiers are around 3-5 mm long.