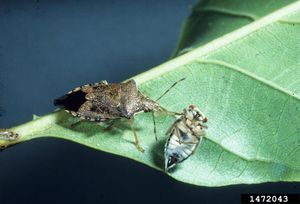 The suborder of Heteroptera contains insects with the forewings folded flat over the abdomen and divided into a sclerotized, basal part (the corium) and a soft and thin apical part (the membrane). The group contains more than 50,000 species with many types of life styles and feeding habits. It includes various species which prey on other insects or which are omnivorous, feeding on insects as well as on plants.

Note:
This page refers to predators of pest insects only, for other groups of Heteroptera see:

The following families with predatory species are currently included in the system: