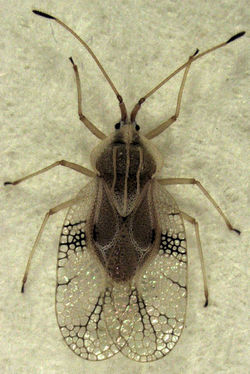 This suborder contains insects with sucking mouthparts. The rostrum usually originates at the apical tip of the head rather from a ventral part like, for example, in the Sternorrhyncha. The forewings (hemelytra) are typically divided into a sclerotized, basal part (the corium) and a soft and thin apical part (the membrane). The wings are folded flat over the abdomen. The tarsi have 2-3 segments.

The group includes several species which feed on weeds and are considered useful biological control agents. This group is covered here.

Note:
The Heteroptera contain more than 50,000 species with various types of life styles and feeding habits. This page refers to weed bioagents only, for other groups of Heteroptera see:

The following families of Heteroptera containing weed bioagents have been entered into the system: