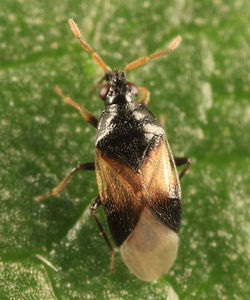 This family contains more than 500 species of bugs and is widely distributed. The members are common on trees and flowers and most prey on small arthropods. Occasionally they might bite and "probe" on the human skin without feeding and those accidental "bites" can be painful. Various species are important biological control agents like those of the genus Orius. Several of these are produced commercially and are mainly used on greenhouses.

The adults are typically small around 3-5 mm long and in general resemble those in the family Miridae. The head is elongated in front and the rostrum is three segmented and curved, similar to that in the Reduviidae and Nabidae. The antennae have 4 and the tarsi 3 segments. A pair of ocelli is usually present. The scientific name of the family is derived from the Greek words anthos (flower) and koris (bug).

The following genera and individual species of predators are currently entered under this family: