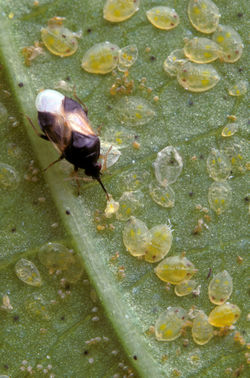 This is an important genus of predatory bugs and some species are commercially produced and frequently used in greenhouses. The species are typically generalist predators and prey on a large variety of small arthropods such as aphids, whiteflies, small lepidopterous larvae, thrips and mites. For example one individual might consume 30 spider mites per day. When prey is not available they feed on pollen in flowers.

The nymphs are minute and the adults are small (often 2-3 mm long). They have an oval mostly black body. The wings extend beyond the tip of the abdomen and might have dark and white marks on the corium.

Examples of important species for biological control are: