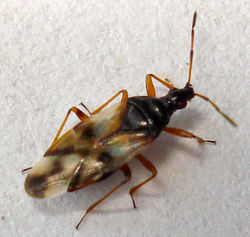 This genus of predatory bugs contains around 70 species and is common in the northern hemisphere. About 40 species have been recorded from China. They feed on small arthropods like aphids, psyllids, thrips or mites. Several are considered important biological control agents like Anthocoris nemoralis or A. nemorum and some are available commercially. They are mainly used in Europe and North America.

The adults are typically 3-5 mm long, brown to black with transparent forewings which usually have some blackish marks.