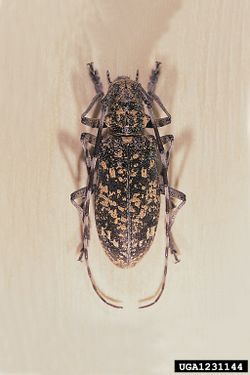 This genus of longhorned beetles contains around 120 species that are found in North America, Europe and northern parts of Asia. Some are vectors of the nematode Bursaphelenchus xylophilus which causes serious diseases of conifer trees. The host trees are mainly pine trees, but also include trees of the genera Picea, Abies, Cedrus and Pseudotsuga.

Freshly killed, felled, stressed or dying trees are used by the beetles for oviposition. The timber value of the felled trees is then significantly reduced due to the infestations. The adult beetles also attack young shoots of healthy trees for maturation feeding and can then transmit plant parasitic nematodes of the genus Bursaphelenchus. The nematodes can kill the host tree, depending on the nematode species and whether it is resistant to the nematode.

Monochamus larvae feed on the cambium or outer sapwood of the host trees. They make noises during feeding, hence the name "sawyers". Pupation chambers are constructed near the bark and the adults then chew through the bark after emergence. The beetles are around 2 cm long, brownish to black and usually with white and black marks. The antennae are longer than the body.