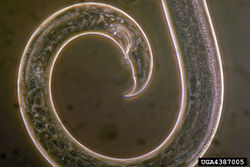 The nematode is a serious pest of conifers (mainly pine trees) in Asia and Europe and is transmitted through longhorn beetles of the genus Monochamus. The species is apparently of North American origin, where it causes little damage to resistant native trees. It has spread to Japan at the beginning of the 20th century and subsequently to other Asian countries (e.g. first record in China in 1982), resulting in serious losses. It has been reported from Europe since 1999. The first introduction was in Portugal and neighbouring regions in Spain were affected since 2008.

Once a beetle carrying the nematode enters a tree, the nematode goes through its phytophagous phase, where it feeds on the epithelial cells which line the resin ducts and disrupts the water-conducting system of the tree. It quickly multiplies in the summer but becomes inactive in the winter.

Under favourable conditions, the development from egg, through 4 juvenile stages, to adult lasts less than 1 week. A susceptible tree can then die within 1-3 months. Once the host tree is killed, the nematodes enter their mycophagous phase, feeding on fungi introduced by the longhorn beetle vector, and eventually enter the pupae of the vector through its spiracles, travelling to a new host with the beetle.

For management diseased trees need to be cut and removed. Strict quarantine procedures, e.g. banning the importation of untreated timber and wood, is very important to prevent further spread of this nematode.