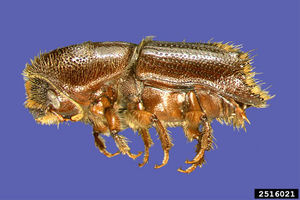 This genus of bark beetles has a world-wide distribution in temperate regions and includes serious pests of conifer trees, mainly pine, spruce and larch. The adults are around 4-6 mm long and brown to black with a cylindrical body. The ends of the elytra form a concave depression (declivity) which is bordered on each side by several strong spines or teeth. The antennal club is oval to nearly spherical. Species can be distinguished by the number and shape of the spines at the rear end as well as by the pattern of the galleries.

While the species of Ips attack mainly declining or freshly felled trees, an abundance of dead or weakened trees (e.g. after storms or droughts) can create outbreaks of some species. Large numbers of beetles then emerge which infest healthy trees. For example, Ips typographus or Ips pini have caused serious outbreaks. The beetles carry plant pathogenic fungi (blue stain fungi) which help them to overcome the defence system of the host trees.