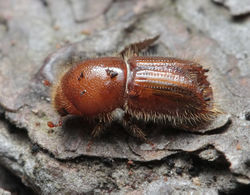 The species has a trans-palearctic distribution and has become one of the most serious forest pests in Europe, killing spruce trees on a large scale. It rarely attacks fir and larch trees.

At low population densities, the beetles attack the wood of recently felled, recently killed or severely weakened trees. However, when large numbers of breeding places become available, in terms of wind-felled trees or dieback through droughts, large scale outbreaks result and beetles start attacking and killing live spruce trees. The beetles carry plant pathogenic fungi which help them to overcome the defence system of the host trees.

Management involves removing or treating infested trees and creating buffer zones to isolate outbreaks areas. Further, mass trapping with trap trees or trap logs are used. The traps are baited with the I. typographus aggregation pheromone and are treated with insecticides to kill the attracted beetles. The pheromone is produced by males and attracts both males and females to suitable breeding sites. It is also used for monitoring populations and the beginning of an outbreak.

Although the adults are tiny, they can disperse over considerable distances, almost 1 km per day. However, the flight is mainly with the wind. There are usually 2 generations per year and the life-cycle from egg, over 3 larval stages, to mature adults lasts 2-3 months. The adults are 4-5½ mm long, dark brown to black, with 2 rows of 4 teeth each at the end of the elytra. The hind margin of the elytra is slightly concave (declivity, see illustrations below) like in many other species of bark beetles.