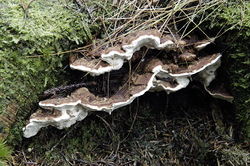 The fungus is widely distributed in temperate regions and causes annosum root rot on pines and other conifers. The yearly losses in terms of timber products have been estimated at around €800 million in Europe (1998). Infected roots develop a white rot and the fungus often spreads to the butt of the tree. The disease develops over several years and only causes above ground symptoms when more than half of the root system is infected. At this stage needles become stunted and brownish and the bark becomes reddish or yellowish. The tree withers and eventually dies. Fruiting bodies (basidiocarps) appear at the butt. The stumps of freshly cut pine trees are often colonized by the fungus which contributes to the spread of the disease.

The fungus disperses through the air by basidiospores released by the basidiocarps. Asexual conidiospores are also produced and might contribute to the dissemination of the disease. Management involves the treatment of stumps after felling. The antagonistic fungus Phlebiopsis gigantea is commercially available and is routinely used in some countries for treating stumps of felled trees.

Basidiocarps can have a diameter of up to 30 cm and are about 3-4 cm thick. They usually have a reddish to dark brown surface with a white margin. Pine needles and other debris may be incorporated into the fruiting bodies. The basidiospores are oval, approximately 5 x 4 µm large, typically with 2 nuclei. The conidiospores are 4-6 x 3-5 µm large with 1-4 nuclei.