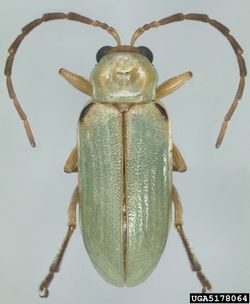 The genus contains more than 400 species of American origin. It includes several important plant pests, like the maize pest Diabrotica virgifera which has been estimated in 2001 to cause around US$ 1 billion damage.

The species of Diabrotica feed on various crops and other plants, some are oligophagous whereas others are polyphagous. Economic damage is found primarily on maize (corn rootworms) and cucurbits (cucumber beetles). The larvae are root feeders whereas the adults feed on leaves and pollen. Several species are vectors of plant diseases. Closely related genera of leaf beetles are Acalymma and Cerotoma.