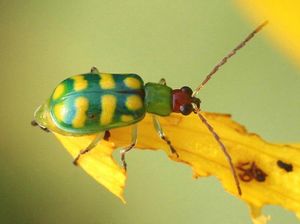 This beetle is found in southern parts of North America, in Central America, as well as in northern parts of South America (Venezuela and Colombia). Adult beetles are polyphagous and feed on cucurbits as well as on various other crops like beans, lettuce, sugarcane or potatoes. The larvae are root feeders and can also damage a variety of crops, including maize, cucurbits, beans, sweet potatoes and groundnuts. In addition, D. balteata has been reported to be able to transmit plant viruses.

D. balteata has several generations per year and the whole life cycle can be completed in 6-7 weeks. The adult beetle is 5-6 mm long with a variable colouration. Typically, the basic colour is a yellowish green, sometimes with a blueish tint. The head and antennae are reddish brown and the tarsi as well as the ventral part of the thorax are black. The elytra have yellow patches which cover together a similar portion of the elytra compared to the green parts.