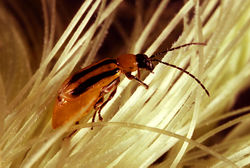 The beetle is an important maize pest in North America. It was originally restricted to Nebraska, Colorado and Kansas but has extended its range eastwards since around 1950. It has been introduced into Europe, apparently repeatedly, starting in the early 1990s when it was first detected in Serbia. Other parts of Europe were subsequently invaded.

The adults feed on the foliage, pollen and maize silk. They lay their eggs in the soil near the base of a host plant where they overwinter. After hatching, the larvae bore into the roots causing the main damage. In North America, yield losses together with the costs of control operations have been estimated at around 1 billion US$ per year (e.g. Tinsley et al. 2013) and at more than €100 million in Europe.

Crop rotation is recommended as the main management strategy. In North America, crop rotation with soybean has long been used. However, around the turn of the century, D. virgifera populations which also attack soybean have appeared. The development of resistant transgenic maize cultivars has reached the field testing stage.