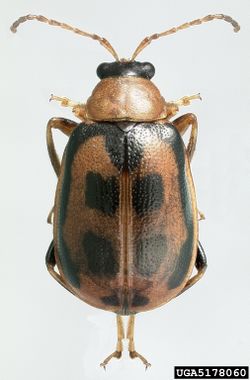 This genus of leaf beetles is found in the Americas. Several species are pests of legume crops like beans and soybeans. The most important of these is the bean leaf beetle, Cerotoma trifurcata, in North America. It causes not only defoliation and pod damage, but can also transmit several soybean viruses. The adults have a length of 5-10 mm. The colouration can be variable, but often involves a pattern of black and orange or yellow.