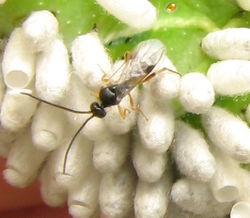 adult of Cotesia congregata emerging from cocoon (click on image to enlarge it)
Source: Wikimedia Commons

This is a large genus of endoparasitoids with nearly 1,000 species and a world-wide distribution. They are especially common in temperate regions. Members of the genus generally attack large caterpillars of the order Lepidoptera and usually have a narrow host range. The genus includes various species which are important for the biological control of insect pests, e.g. Cotesia vestalis parasitizing Plutella xylostella or Cotesia flavipes, a parasitoid of stem borers.