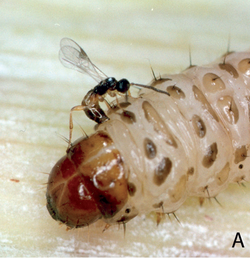 The wasp is a gregarious endoparasitoid of stemborers, native to southern Asia. It was introduced into Africa (1993) against the Asian stem borer (Chilo partellus), but also attacks other stemborers. It has been further introduced into the Americas.

For example, it is routinely used in sugarcane fields of Brazil against the stalk borer, Diatraea saccharalis. Several million hectares are treated annually with around 6,000 parasitoids being released per hectare. Dos Santos et al., 2015 give an example for the practical use of this species.