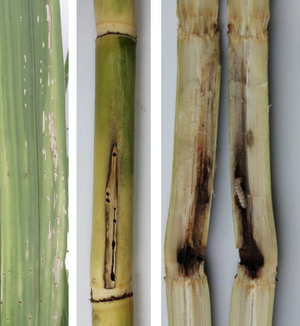 The stem borer is a pest of maize and sugarcane in Central and South America. During field studies in Brazil, sugarcane yield reductions of 10-20% were estimated (Rossato et al., 2013). In Texas, the average damage to sugarcane by D. saccharalis and Eoreuma loftini was estimated at 20% of the internodes infested, resulting in a loss of about 2 t of raw sugar per hectare (Legaspi et al., 1999). The larvae tunnel into the developing canes or into maize stalks. Sorghum and rice might also experience significant damage. During feeding, the apical meristem of the plant may be destroyed.

The development from egg to mature adult lasts between 4 weeks in the summer and half a year in the winter. There are usually several overlapping generations per year. In cooler regions, the larvae overwinter. The larvae pupate inside the host plant. For management, it is recommended to destroy sugarcane residues after harvest. Insecticides are commonly used for control and resistant cultivars (including Bt crops) are available.

The adult is whitish to yellowish brown. The wing span is around 30-35 mm in females and 20-25 mm in males. The larvae are whitish and the summer form (but not the winter form) has several large brown spots on each segment. The number of larval stages is variable, but most often 5-6.