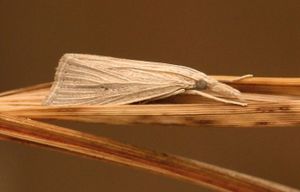 The moth is native to Mexico and has become a major pest of rice and sugarcane in the Gulf Coast region of the United States. It also attacks maize and sorghum. It was first discovered in Texas in 1980 and spread to other parts of the region. For example, it was first recorded from Louisiana in 2008 and at that time it has been predicted that annual economic losses in rice and sugarcane might reach $220 million in 2035 if all parts of Louisiana were infested and planted with susceptible cultivars (Reay-Jones et al. 2008).

The damage is caused by tunneling of the larvae and subsequent infection of the plants by fungi. There are several generations per year, partly overlapping, with one generation lasting for 45-50 day under summer conditions.