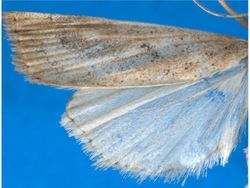 The moth is a serious pest of maize, sorghum and pearl millet in southern and central Africa. It is native to southern Asia and was introduced into Africa before 1930 (first recorded in Malawi). The young larvae feed on the leaves of cereals and grasses and bore into the stems and the inflorescences when they grow bigger. The damage results in stunting, stem breaking and reduced grain production. Seedlings are particularly vulnerable to attacks and are often killed. Yield losses may reach 50%.

Infestations are often mixed with those of other stemborers like those of Busseola fusca. Repeated applications of insecticides are commonly used for control, but the effect is reduced due to the larvae living inside the plant.

The life cycle from egg to mature adult lasts around 2 months. The larvae may enter diapause during dry periods. The adult has a wingspan of 20-25 mm. The forewings are brownish with scattered darker scales and some ill-defined darker lines.