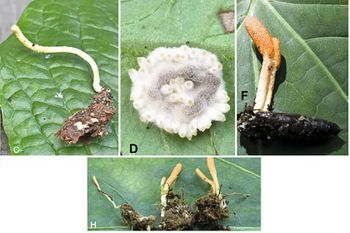 This genus of entomopathogenic fungi is widely distributed and includes around 15 species. They are well known for their club-shaped sexual fruiting bodies, growing out of the bodies of infected, dead insects.

Many species of Cordyceps have been previously classified under the genus Isaria. However, in a taxonomic revision, Kepler et al. (2017) proposed the "rejection of Isaria in favour of Cordyceps owing to the confusion surrounding the application of Isaria".