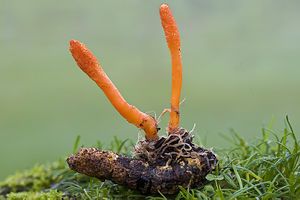 This fungus is widely distributed and infects various species of insects. Mostly Lepidoptera that pupate underground are attacked. The fungus has been reported to have medicinal properties, similar to Cordyceps sinensis which is cultivated in Asia.

The fruiting bodies grow up to a length of more than 5 cm and have a width of up to 1 cm. They are club-shaped and reddish orange. At the club end, perithecia are embedded and only their tips are visible. The ascospores are thread-like, around 300 µm long, multiseptate and break up into smaller sections.